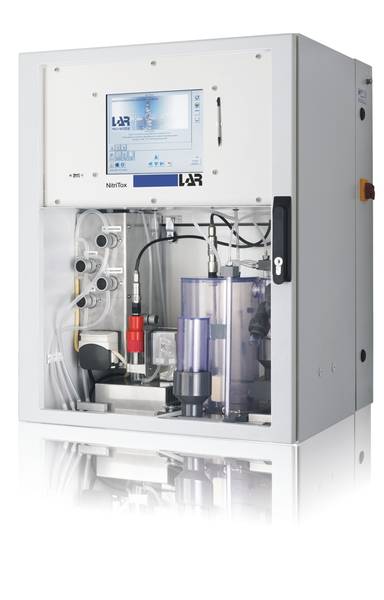 Nitrification is the stage in biological waste water treatment where certain bacteria oxidise ammonium to nitrate. These bacteria are called nitrifiers. Due to their high sensitivity toxic loads can affect them very easily. Toxicity is the most common disturbance to this important treatment process. A failure within the nitrification not only leads to a breakdown of treatment processes, but can cause an increased discharge of ammonia into rivers and lakes causing fish to die. The fast and reliable monitoring of incoming loads for toxicity warns of the danger in time, helping to protect the biological treatment processes.

LAR’s toxicity analyser NitriTox continually monitors water treatment plants for pollutants. Potential toxins in water are determined through the reaction of highly sensitive bacteria. The measurements follow at  intervals of less than 5 minutes. Thus allowing enough time to introduce countermeasures after the occurance of pollution. What’s more, the NitriTox offers three warning levels, which can be individually set.

NitriTox contains a bacteria culture, which constantly and independently produces Biomass. This means that there is always enough bacteria for each new measurement. Furthermore, the risk of the fermenter being contaminated is removed because every water sample is tested with a fresh amount of bacteria

The bacteria are extremely sensitive to a multitude of toxins. Through their reaction to the harmful substances in the water sample, toxicity can be reliably determined. For example, a reaction already starts at a cyanide concentration of less than 0.10 mg/litre.

Firstly, it is not necessary to purchase or externally cultivate test organisms, such as fish or daphnia. Secondly, the toxicity analyser is extremely low in maintenance because the bacteria mass constantly proliferates on its own.

The bacteria live on (consume) oxygen from the conversion of ammonia to nitrate, which is why they are described as nitrifiers. NitriTox measures this oxygen consumption.

Toxic substances in the sample contents inhibit the respiration of the bacteria, thus lowering their oxygen consumption.

The NitriTox monitors this oxygen consumption and hence the toxicity.