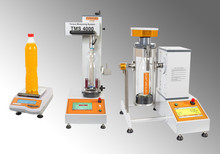 CO2 concentration, opening torque and fill level are quality parameters that significantly affect the product quality noticed by the customer. A continuous monitoring of these is therefore essential to ensure a constant and repeatable quality of filled beverages. The Steinfurth CPA-Concept is especially developed to satisfy this demand by improving the measurement workflow processes of the so far mostly decentralized and not most optimal efficient monitoring of these parameters.
Key-element of the Steinfurth-CPA-Concept is the “Steinfurth-Master-Module”, which acts as central Control-Unit for all linked devices (“Salves”). Only pre-condition of the “Slaves”, which also can be devices from different manufacturers, is an existing data-interface. With fulfilling of this pre-condition, global sample- and procedure adjustments for the whole Mini-Lab measuring-chain can be executed via the control-panel of the Steinfurth-CPA-Master-Module. This can be done automatically via barcode scanner or manually by using the integrated touchscreen. Subsequently the measurement results of all devices get stored and collected at the internal hard drive of the Master-Module. This enables a central readout and transfer of the measurement-data by the requiring destination at any time (via Ethernet-interface direct into a PC-Network).The Steinfurth CPA-Mini-Lab-Concept develops its maximal benefit by outsourcing of the Quality Assurance measuring operations to the filling line. As all Steinfurth products also the Steinfurth CPA-components convince with robust construction combind with the automatic, extremely easy and user independent operation.

The worldwide accepted CO2 concentration measuring system Steinfurth® CO2MS unites sample preparation, measurement and result analysis in only one device. By consideration of all package influences to the sample the system delivers extreme fast extreme precise results. (The Steinfurth “Master-Function” is optionally available for all CO2MS devices)

The automatic torque measuring device Steinfurth®  TMS 4000 is especially designed to analyze user independent the opening performances of all kinds of screw caps. The instrument contains a very flexible customized programmable control system (with complementary full CPA-Master functionality on board).

The high precision balance Steinfurth® FLB 3400 is used to measure the fill level, by taking tare weight and density into account and is available as Standalone or “Slave” device.